There was a time in America, when in every home, visible to every visitor, was an opened "Family Bible".  There is a story about one particular family of four brothers who left home for Texas A&M and became very successful.  One a doctor, two lawyers and one a decorated veteran.  One evening, the chatted after having dinner together.

They discussed the 95th birthday gift they were able to give their elderly mother, who moved to Florida.

The veteran said, "You know I had a big house built for Mama.'

One of the lawyers said, 'And I had a large theatre built in the house".

The doctor said, "And I had my Mercedes dealer deliver an SL600 to her."

The other lawyer said, "You know how Mama loved reading that old Family Bible and you know she can't read anymore because she can't see very well. I met a preacher who tole me about a parrot who could recite the entire Bible.  It took ten preachers almost eight years to teach him.  I had to pledge to contribute fifty-thousand dollars a year for five years to the church, it it was worth it.  Now, Mama only has to name the chapter and verse, and the parrot will recite it."

The other brothers were impressed.

A few months later they each received "Thank You" notes from Mama.

She wrote, "Milton, the house you built is so huge that I live in only one room, but I have to clean the whole house. Thanks anyway."

"Marvin, I'm too old the travel.  I stay at home; I have my groceries delivered, so I never use the Mercedes.  The thought was good. Thanks.''

"Michael, you gave me an expensive theatre with Dolby sound and it can hold 50 people, but all of my friends are dead, I've lost my hearing and am nearly blind. I'll never use it.  Thank you for the gesture just the same.'

'Dearest Melvin, you were the only son to have the good sense to give a little thought to your gift.  The chicken was delicious!  Thank you so much!"

After all, it IS the THOUGHT that counts, (unquote)

And that's what I get from My Box of Chocolates, right here in my corner studio under the Shadow of Kyle Field. 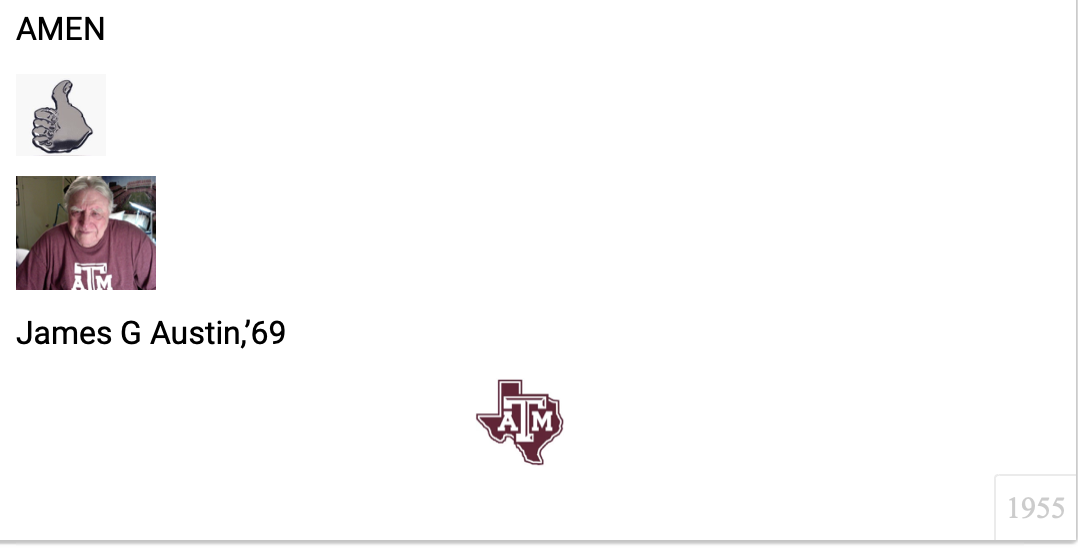